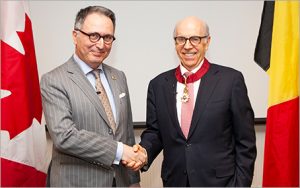 TORONTO – We are pleased to announce that Ron Mock, President and Chief Executive Officer of Ontario Teachers’ Pension Plan (Ontario Teachers’), was today presented with Belgium’s Commander of the Order of the Crown, one of the highest distinctions in the national orders of the Kingdom of Belgium.

The award, an honorary order of knighthood, was conferred by Belgian Ambassador Raoul Delcorde at a ceremony in Toronto in recognition of meritorious service to the Belgian state.

“This prestigious decoration is bestowed on behalf of His Majesty King Philippe of Belgium,” said Ambassador Delcorde. “We are pleased to be able to recognize Mr. Mock for his friendship and contributions to the wellbeing of the Belgian people, reflecting the enduring connections that Ontario has with Belgium in the important sectors of education, commerce and culture.”

The ceremony occurred at Ontario Teachers’ Toronto headquarters, where Ambassador Delcorde was joined by Honorary Consul of Belgium for Ontario, Donald B. Johnston.

As of December 2017, Ontario Teachers’ had more than $1.7 billion invested in Belgium, including ownership of 39 per cent of the Brussels Airport. The Brussels Airport is the country’s second-largest economic driver, and one of its largest employers. With 20,000 direct and 40,000 indirect jobs, the airport is the largest private employer of Brussels residents.

“I am so proud to receive this honour,” said Mr. Mock. “I can think of no greater recognition of our strong and enduring partnership with the country of Belgium, its government, and His Majesty the King.”

The Order of the Crown is awarded for service to the Belgian state, including distinguished artistic, literary or scientific achievements or important contributions to the development of industry and trade. It is the second-highest Belgian Order of Knighthood.

The Ontario Teachers’ Pension Plan (Ontario Teachers’) is Canada’s largest single-profession pension plan, with $189.5 billion in net assets at December 31, 2017. It holds a diverse global portfolio of assets, approximately 80% of which is managed in-house, and has earned an average annualized rate of return of 9.9% since the plan’s founding in 1990. Ontario Teachers’ is an independent organization headquartered in Toronto. Its Asia-Pacific region office is located in Hong Kong and its Europe, Middle East & Africa region office is in London. The defined-benefit plan, which is fully funded, invests and administers the pensions of the province of Ontario’s 323,000 active and retired teachers. For more information, visit otpp.com and follow us on Twitter @OtppInfo.